Introducing the ATP Team and FAQ

We at Amanda Tindall Photography would like to welcome everyone and introduce our ATP Blog Series. We will be covering a large range of items set out in a once a month blog. To begin this new and exciting series, we are going to start off with some frequently asked questions and about who we actually are.

A couple common questions are always: who is Amanda Tindall, how did she get started, who will be my photographers, and when will the bride and groom meet them? What started as a hobby for Amanda, has grown into an award winning business that has four different photographers: Amanda, Nick, Hannah, and Alessandra.

In every wedding package we offer, we have two shooters, and the two shooters will be a combination of those four photographers. During your engagement session, you will meet the lead photographer that will be with the you on your wedding day. This helps to create a level of comfort and familiarity between the bride, groom, and the lead shooter.

The next common question is can I see some of Nick/Hannah/Alessandra’s work? We sat down to create examples of each of their work, a portfolio if you will, and realized we cannot. Not because we don’t want to, but because we honestly cannot. We can honestly not distinguish pictures from each of us. And this is a perfect example of why:

Can you tell who actually took the picture? Because we cannot. Now there are some obvious examples where we could pick out some pictures that clearly a specific person took, for example when a specific shooter was with the groomsmen pre-ceremony. However, even with those, often times the photographers mix throughout the day, and what looks to be clearly a photo taken by Nick is actually a photo taken by Hannah during that five minutes she was meeting the groomsmen pre-ceremony. Furthermore, just because a photographer is the one physically pressing the button on the camera, does not make that picture that specific photographer’s. What people might not realize is in a two person team, the second shooter is busy setting up flashes, directing people where to stand, where to look, what to do, and in short, is directing the image. Just because the lead photographer is physically pressing the button, does not necessarily make that image that photographer’s alone, as the second shooter is often doing more work actually creating the image than the lead photographer. 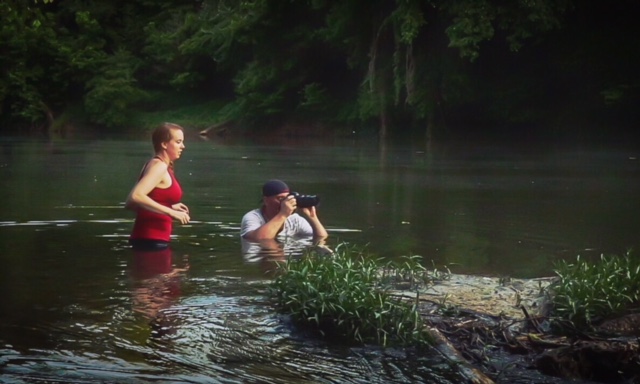 Next up, who we actually are. Amanda and Nick are a husband and wife team. Living in High Ridge, Missouri, they’ve been shooting weddings for over five years now. Some of you may have had the pleasure of meeting and working with Hannah and Alessandra as they were in training and were a third shooter numerous times. Both have joined Amanda Tindall Photography in 2017. However, just because they were in training doesn’t mean we were training them to be photographers. No, no, no. They were already photographers. We were training them to mirror Amanda Tindall Photography’s style that our clients have come to love and expect.

Amanda hails from Centralia, Illinois. She graduated Sandoval High School, and got her degree from McKendree University. Amanda met Nick back in 2008, were married in 2012, and has two daughters. Amanda is the original artist in ATP, and has taught Nick everything he knows, or so Amanda claims. And yes, Amanda and Nick will be dancing in the “who’s been married the longest” dance. We normally survive about three rounds before we have to go back to work.

Nick is originally from St. Louis, Missouri, yes, the actual city. He graduated from Lindbergh High School, and has degrees from Ranken Technical College, Lindenwood University, and Saint Louis University. He has a direct communication style, speaks fast, and will keep even the most “fun” of wedding parties flowing effortlessly. Nick is clearly the beauty in the group.

Hannah grew up in Hardin, Illinois. After graduating from a High School, she got her degree from Missouri Baptist University. Hannah married her High School sweetheart in 2014, and currently lives in Hardin with her cat Oscar and his dog Frosty. Outside of working for ATP, Hannah owns a photography business, Maple Hill Photography, mainly concentrating on family, engagement, and High School senior photography in Hardin, Illinois and surrounding areas. When asked about Amanda Tindall Photography, Hannah replied with, “I know you will love ATP as much as I do, because Amanda (the real Boss) and Nick (thinks he’s the Boss) are some of the most hard working, talented, kind, and fun-loving people I know!” Following her hanging from a grain bin on a specific wedding day, we at ATP have affectionately nicknamed her the Spider Monkey.

Alessandra grew up in Belleville, Illinois. She graduated from Belleville High School, and has a degree from Westminster College. After college, she moved to St. Louis and currently lives in Rock Hill, Missouri. Alessandra has a beautiful beagle/dachshund named Sadie Mae. Sadie might be the most spoiled dog in the world between going to doggie daycare, trips to Lowes, homemade treats, and even her own heated blankets throughout the house. We refer to Alessandra as ATP’s very own modern day hippie. She makes her own beauty products like body butter, lotions, and soaps. Having a creative eye for detail in everything she does, she even creates beautiful bridal bouquets from Harry Potter books using the pages as flowers. And, as we have been subsequently informed, she is very good at making beautiful bouquets out of regular flowers too.

We look forward to your wedding day...

And just remember, when we are in the middle of taking our thousandth picture of you, even photographers need a second to get ready for a picture.

The All Important Timeline